Providing help after the floods

Unusually heavy rain had been forecast several days ahead of time. Meteorologists began warning about the approaching weather system on Saturday, 10 July. And this system was moving very slowly – probably due to the effects of climate change. Too much water for the small streams and rivers in the regions most badly impacted. No one, though, had predicted just how much rain would actually fall. On 14 July, some parts of the German states of Rhineland-Palatinate and North Rhine-Westphalia were drenched by more than 100 litres of rainfall per square metre over a 24-hour period. 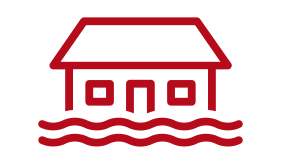 Shops, hotels, factories and workshops were torn down by the waters.

Rivers reached record levels and caused devastating flash flooding, which destroyed almost 500 buildings, at least 192 of which were people’s homes. Shops, hotels, factories and workshops were torn down by the waters. According to experts, more than 3,000 of the 4,200 buildings located along the Ahr River were damaged – over 70% of all the buildings. Over 180 people lost their lives.

REMONDIS joined volunteers from across Germany to help the victims

The extent of the catastrophe became clear as soon as the waters had receded. People from across the whole of Germany rushed to the regions to help those impacted by the floods. And this help is still being provided today as not all of the damage has been repaired yet. The infrastructure is also still in the process of being fixed. With bridges completely destroyed and roads damaged and, in some cases, closed off, it was particularly difficult for the people to collect the mountains of bulky waste and other types of waste from the streets. And this is a vital task as it prevents the spread of disease and maintains basic hygiene levels in both public and private spaces. REMONDIS colleagues travelled straight to the region to help out the waste management companies operating in the District of Ahrweiler. Everyone was totally committed to the cause. The helpers from the private and public sector waste management businesses were on hand to provide support as soon as the floods had receded even though many of their own homes or workplaces had been affected. They stayed in the region for hours on end voluntarily doing overtime and working at the weekend so that the local residents did not need to worry about public hygiene and their flood-damaged household items could be collected as quickly as possible.

Peter Kurth, President of the BDE [Federal Association of the German Waste Management Industry] immediately summed up the situation for all those providing circular economy services: “What is most important now is to help all those living in the regions affected by the devastating floods. The refuse has to be removed from the streets as quickly as possible because waste – especially when it’s heavily contaminated – can cause a whole range of problems, whether it be vermin, odours or hygiene.” To begin with, one of the biggest challenges was to find places where the large volumes of waste could be temporarily stored and to ensure that the materials were then safely processed in accordance with all rules and regulations.

To begin with, one of the biggest challenges was to find places where the large volumes of waste could be temporarily stored and to ensure that the materials were then safely processed in accordance with all rules and regulations.

One of the main problems that the waste logistics experts had to solve was the huge amount of bulky waste. Enormous volumes were sent to some of REMONDIS’ locations within just a few days – the same amount that they would normally receive in a year. The municipal association VKU declared that it would take them several months to remove all the waste materials. This catastrophic event generated over 300,000 tonnes of waste in the Ahr region alone. In a statement, the Ahrweiler district authorities described the size of the problem as follows: “This is the same amount as 40 years’ worth of bulky waste – i.e. the same amount of bulky waste collected since 1981.”

A large part of this bulky waste, which also had all kinds of household waste mixed in with it, was taken to landfills in line with an emergency decree. 100,000 tonnes alone were transported to the Ochtendung landfill and in no time at all the site had reached full capacity and was unable to accept any more materials. Simply landfilling residual materials is actually a waste management route that Germany has turned its back on. And for good reason. Waste containing large amounts of organic residue emits methane gas when it begins to rot and this gas is up to 87 times more damaging to the climate than CO2. The goal must be, therefore, to gradually remove the material from the landfills. Even if it cannot be recycled for reuse, it can at least be sent for thermal treatment, which is much better for the climate. 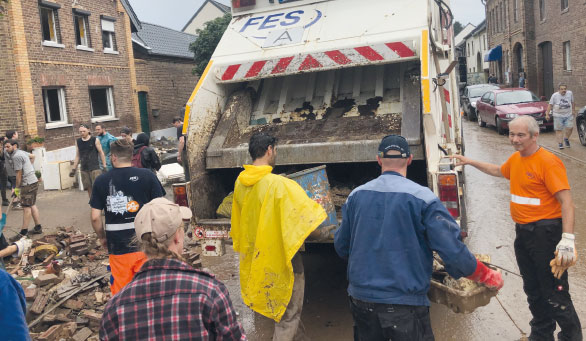 Even FES, a company located in Frankfurt 200 kilometres away, sent staff to the flood-impacted regions

Many people working at REMONDIS’ branches and associated companies volunteered to help out. Working together with their colleagues at the local waste management businesses, they managed to collect thousands of tonnes of bulky waste in no time at all.

Mountains of waste were also piling up in Erftstadt where the Erft – normally a small river – had destroyed half a neighbourhood causing it to collapse into a gravel pit. Here, too, the floods had destroyed roads and bridges so that, to begin with, it was almost impossible to collect the materials. Images taken by REMONDIS’ branch in the Rhine-Erft District show how their employees tried to reach their flooded buildings on home-made rafts. And, despite their own difficult situation, the company’s employees from Erftstadt and the Ahr Valley did not hesitate to go and help the flood victims by picking up their household items that had been irreparably damaged by the water. A really sad job as everyone has belongings that are particularly important to them, such as photo albums and photos of their children – things that they have collected over many years and are irreplaceable.

All these objects were now being picked up and taken to REMONDIS’ ‘an der Tonstraße’ branch. With lorries arriving every minute, heaps of bulky waste were piling up in the areas between the various recycling facilities (for which permits had been applied for and granted in an accelerated process). It is practically a miracle that they have already been sorted and processed just five months after the catastrophe. This was not a miracle, though – this happened thanks to the hard work and tireless efforts of the staff.

Support from across the Group

People working at some of REMONDIS’ associated companies also volunteered their help. Wirtschaftsbetriebe Oberhausen (WBO), for example, provided support in two of the regions affected by the floods. 14 employees from this PPP between the City of Oberhausen and REMONDIS, which recently celebrated its 25th anniversary, travelled to the neighbouring town of Essen. Here, too, the buildings on the bank of the River Ruhr had been badly damaged by the flood. Three large bulky waste collection lorries and a pick-up truck were sent with them so that they could give a helping hand to Essen’s waste management firm EBE (also a REMONDIS PPP) by removing the bulky waste and damaged electrical appliances from the streets. Two further WBO employees travelled to Bad Neuenahr. This town had not only had numerous houses destroyed by the floods but its sewer system had also become clogged up with sludge. WBO sent a vacuum/cleaning truck to the region to help them unblock the pipes. “Our employees travelled to the areas and worked hard to clean the sewer pipes so that that water could flow again when the next rainfall came,” explained managing director Karsten Woidtke.

REMONDIS Aqua’s water specialists immediately provided practical support as well – travelling to the Ahr Valley to unblock the sewer system there. See also the report Flood disaster: “It was a given that we would help”

Work began during the night of the floods

REMONDIS’ Eifel-Mosel branch supported the rescue efforts made during the actual floods by using six of their hook-lift trucks to transport sandbags to the worst affected neighbourhoods. At 2 o’clock in the morning, one of the employees tried using a REMONDIS excavator to remove the objects floating in the Biersdorf reservoir to reduce the force on the dam wall. Seven hook-lift trucks were then used the following day to start removing the bulky waste from the streets. At the same time, their colleagues working in the offices and at the weighing machines patiently answered the queries that were coming in practically every second.

Staff working at Awista, a company based in Düsseldorf, also worked non-stop after the floods – collecting 2,307 tonnes of flood-damaged bulky waste and around 900 household appliances. A total of 49 people from Awista, a joint venture between the City of Düsseldorf and REMONDIS, volunteered to take on extra shifts to help out. 333 tonnes of the bulky waste that they had collected were taken to REMONDIS Rhine-Wupper in Reisholz to be sorted. They had the same problem as all the other sorting plants in the affected regions: the normally recyclable materials had been so badly affected by water, sludge and faecal material that it was practically impossible to send them on for materials recycling. REMONDIS did its best, however, to recover as many materials as possible so that they could be recycled and reused. They had no choice but to send the rest for thermal treatment.

Parts of the Ahr Valley resembled a war-torn wasteland after the floods. Months later, work is still being carried out to clear up the region

A huge thank you to all the helpers!

The services provided both during and after the catastrophe have shown once and for all that the people who work in the circular economy keeping the country, streets and sewers clean belong to the group of essential workers. Local inhabitants all around the country appreciate the efforts made by the drivers, refuse collectors, sorting experts, recyclers and sewer technicians. And they will continue to appreciate their work long after the flood damage has been repaired. Our thanks go out to all the helpers.

What’s next for REMONDIS?

It’ll all be better!

It’s 7 o’clock in the morning. Time for Tabea’s shift to begin. The 23-year-old arrives at…

There are times when negative events come together, make each other even more powerful and threaten…

The Southwest Palatinate has a German table tennis champion

Anyone who plays table tennis in the Southwest Palatinate, Germany, will certainly have heard the name…

IFAT 2022: This is how REMONDIS experienced the trade fair

The REMONDIS Group can look back on an intensive week at the trade fair: IFAT, the…